The confidence and finesse exhibited in these two tracks give an impression of comparative ease behind the mixing desk, suggesting Anton Ivanchenko has casually spent the morning absorbing the spirit of hip hop in New York circa 1990, drank a few coffees, sampled a load of obscure Soviet vinyl, and thrown together these tracks without breaking a sweat. Maybe that is actually true, and if so it does not detract from the craftsmanship displayed in any way whatsoever, it's simply a painful fact that some people just have the all-important and elusive 'it', or to be crude, the x-factor.

Anton's arrangement and production on offer here ooze class by the bucketload, kicking off with 'King of Funk', a blunted beat, jazz soaked workout that any golden era head will immediately recognize as the real deal. Looped up samples this isn't, this is exquisitely crafted instrumental hip hop with solid song structure and direction, as if a band filled with seasoned musicians were jamming in the studio at 3 am with the tape running. It's also dope as F***!

Flip over for 'Give The Horns Some', the opening track from the LP 'Monolith' (Rucksack Records) that this Mukatsuku 45 is taken from. This track also comes across more like a band in its overall feel, it has coherence and gravitas in equal measure from its expansive intro themes which take up a 3rd of the tracks total length before dropping into what could be determined as the main trumpet-led groove, underpinned by snappy drums and plenty of echo. Like Miles Davis meets King Tubby in a smoke-filled Moscow jazz club. In respect of the LP, it's a statement of intent that doesn't give a false picture of what lies thereafter, a fabulous piece of music (and a fabulous LP). Just check 'Wrong Frequency' on there, and it wouldn't surprise me if Nik at Mukatsuku had this as a strong contender for the 45 as well.

Anyone harking back to the golden days of hip hop is going to love this, I guarantee it, but also as a contemporary piece of music, this 45 (and LP) strikes that rare balance of influence and progression just oh so sweetly.

I just wish I knew about the album before it bloody sold out! Yo Rucksack, help a brother out... 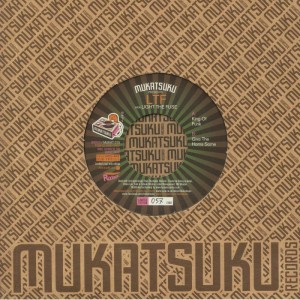