Now here's something that 100% demands inclusion into your record collection. An absolutely wonderful collection of 45s all produced by the famed Jamaican producer Herman Chin Loy. Now I must admit that as someone who isn't as knowledgeable about reggae as one should be, Herman Chin Loy is a name that I didn't know, but boy oh boy do I dig his style on the mixing desk. Pressure Sounds have collected 10 hard-to-find tracks into 1 gorgeous box set that beautifully presents Herman's obvious flair for fusing deep reggae with the psychedelic flavours of American funk and soul. As soon as the first cut drops you know you're in business, 'Medusa' by The Aquarians is just epic, more psyche funk than reggae and as deep as the oceans, absolutely love it. And then the title track 'Soul Vibration' hits with raw psychedelic reggae, with everything else in between highlighting the man's breadth and scale of talent.

Pressure sounds have done the music justice by presenting the 5 x 45s in the Rolls Royce of record boxes. Each hand-assembled box is a unique piece of art. The boxes have been hand silk-screened with great detail and a variety of color-ways that accentuate the lush, psychedelic artwork of Okinawan artist, Massa Aquaflow. No two boxes of this limited edition are the same and will definitely add to the enjoyment of the music within.

Besides the 5 records, the set includes a silkscreened poster with extensive sleeve notes and an interview with Herman Chin Loy by Diggory Kenrick; and a printed towel, perfect for wiping off the sweat caused by listening to these hot and sticky tracks. 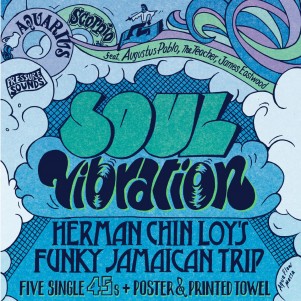 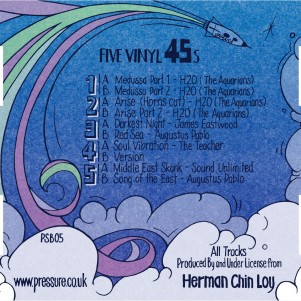