1. Where are you based?
Boogie Down Bristol Baby

2. Why 45s?
To start with because they were cheaper to buy than 12”s or LPs. You could pick up new 45s for 99p from places like Woolworths or Kay’s Records (my local Record shop in Brislington) when I started collecting records around the age of 10..
Now, to me it’s the ultimate DJing format - short, loud, precise & to the point - just how music should be in my humble opinion.

3. Your inspiration/mentor/hero?
To start with the DJs I used to watch in Bristol in the early 90s when I was going to places like The Cooker & St Nicholas house in St Paul’s .
John Stapleton was one of the 1st DJs I’d always want to check out (who now owns Wanted Records in Bristol) - he’s now a very good friend but was an early inspiration to get behind a set of Decks with some Wax.

Now I just need to watch DJ KOCO from Japan to realise that I still have a bit of catching up to get to his standard!

5. Best ever dig?
Lots of amazing experiences digging with my Dynamo Productions Brother Andy Smith in the late 90s / early 00s in the States -I  remember Big Al's Record Barn in San Jose where Al had more 45s than I’d ever seen in my life - super organised & we were very vocal about how excited we were to be there - Big Al thought we were French because he couldn’t understand our Bristolian Accents!
My most lucrative scoop came closer to home though in Plastic Wax Bristol in the mid-00s they were doing 4 x 7”s for a pound.
For one Queens English pounds on that day I got Big Daddy Kane 'Set It Off'...

And Public Enemy 'Rebel Without A Pause', Nice!

6. All originals pressings?
I prefer OGs but if it’s a nice loud, clear Pressing there’s nowt wrong with playing it on a re issue as far as I’m concerned - I also have a few carvers of my own tracks which are not on a 45.

7. Do you hoard or buy and sell?
I Buy & Sell. My Studio is also my Record Store so I get overran by wax so every few months I have to do some vinyl pruning to make room @ Boca Towers!

8. How many 45s have you got and how do you catalogue/store them?
About 4K stored in Adidas Original Boxes (another obsession) & MDF boxes - check my Instagram feed for pics!

Would love to rock doubles of this in my set! The album this track is from - 'Odely' - is totally Dope.
Beck is an amazing consistent artists who has continually produced amazing material. This is produced by The Dust Brothers who also produced 'Paul’s Boutique' by The Beastie Boys. I’m really influenced by what the Dust Bothers were doing around that time but don’t tell anybody ..

What a tune this is but typical major label (Island / Universal) nonsense that they don’t realise that there’s loads of us 45 slingers like us who’d love to bust that belter in their set on a nice 45 Pressing but they seem to only focus on R6 plays & bloody Spotify Playlists!

Fab Slab of cut & paste party starting business! I’ve forgotten how many times I’ve asked Ashley (Katalyst) to let us @ 45 Live Records to put it out on a Donut but he says “No” every time! The invitation is still there Ash If you’re reading this!

11. Biggest disaster whilst DJing?!
New Years Eve this year was pretty bad @ the Hen & Chicken in Bristol 20 mins into my set leading up to Mid night there was a power cut! People moaning at me for ruining their Big Night! Not much I could do really?! We eventually got the electricity back on after 10 mins but it felt like an eternity!
A bit of a nightmare! 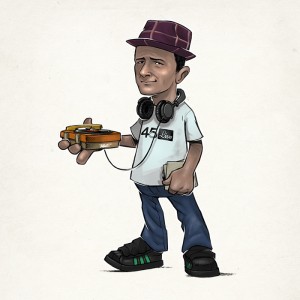