Dub be good to me!

Wrongtom’s now into his 4th decade of a vinyl obsession which started when his brother convinced him to spend his pocket money on Doug E Fresh’s “The Show” back in ‘85. Ten years later Tom played his 1st DJ set at Hoxton’s hallowed (and sadly missed) Blue Note, and he’s been bothering dancefloors worldwide with his collection ever since.

Though he’s now mostly known for his work on the UK reggae/dancehall scene, having produced tracks for the likes of Tippa Irie, Ragga Twins, Errol Dunkley, Roots Manuva and JC Lodge to name a few, Tom’s had broad tastes from word go. His record collection covers everything from spiritual jazz to bollywood disco, electro to go-go. There’s even a large shelf dedicated solely to Prince and his Paisley Park affiliated entourage, and another just for spoken word.

Funk and soul are at the heart of all this of course - Tom held down a residency with fellow 45er Greg Belson in the early 00’s and found his feet, quite literally, on sticky dancefloors during London’s funk boom in the 90’s -  but it’s a DIY approach to music which makes up the backbone to a Wrongtom set whether it’s an 80’s dancehall selection, 50’s RnB, Chicago house, riotous funk or spiky no-wave disco (or sometimes a combination of all of this stuff), it’s the rawness of music made outside of the mainstream, in basements, garages and bedrooms which ties it all together.

Catch Wrongtom rocking 45s and throwing curveballs into the dance at a venue near you soon. 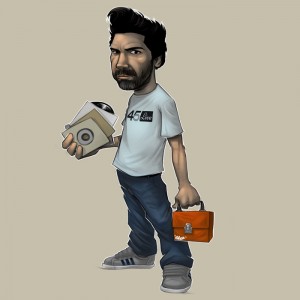