Andy Smith was the first DJ to release a multi-genre mix album on a major label. When his mix-CD The Document hit the streets back in 1998, it became the soundtrack for a generation who had heard Coldcut's Journeys By DJs but needed to hear more - The Document filled the void. It segued tracks from artists such as Tom Jones (way before he came back in vogue with Reload and newer tracks such as recent top ten hit Stoned in Love); Peggy Lee (sample source for the Beastie Boys single Ch-Check It Out); The Jungle Brothers and even The Spencer Davis Group. This was new to record buyers but for Smith a mixed bag of treasures has always formed the typical contents of his DJ set. This appreciation of different genres made Smith the ideal person to provide sample material for Portishead on their first two albums. He went on to make his name as the band's international tour DJ – reflecting their respect for both the art of digging for breaks and hip-hop scratch DJ-ing. Hip-hop elements formed the basis of the unique Portishead sound.

Since the Portishead tours he has established himself as an underground producer of some of the most irresistible hip-hop breaks-based music around, working with Scott Hendy (Boca 45) under the name Dynamo Productions. Their album Analogue, which notched up a top-ranking five out of five in Mojo magazine, featured San Diego-based MC Profile from the much respected Sound Providers Crew. Andy is currently working on his debut artist album.

The Document mix-CD series
Following on the success of The Document, which sold in excess of 100,000 copies, Andy released Document 2 and Document 3 to critical and popular acclaim. Vinyl copies of all three are sought after and regularly go for a king's ransom on Ebay!

The Trojan Document
In 2006, the Document series was given a reggae flavour with the release of The Trojan Document (Sanctuary Records). The release presented another mix album first – with Smith giving the listener a live sound system experience complete with rewinds, shout outs and reverb sounds. The Trojan Document takes you on a journey from early Ska, Rocksteady, Roots, Dub, DJ tracks and Dancehall

Andy Smith’s Northern Soul
Another first for Andy as he compiles a mix CD of 60's northern soul 45's to compliment his long running northern soul night at The Jazz Café in Camden Town, London

Andy Smith's Freestyle Mix
Andy has also done a Mix CD for the much respected 'Freestyle' label. This Cd includes the first track under Andy's own name, 'Sounds Start Rockin' which was also released as a 12" gaining plays by Joe Ransom on Kiss 100.

Andy Smith Diggin' in The BGP Vaults
2008 is the year Andy was given the opportunity to dig in the vaults of BGP records (Beat Goes Public) to bring a fresh new outlook to their esteemed back catalogue.

New Orleans Funk (compiled with Dean Rudland)
A selection of Funk tracks to come out of ‘The Big Easy’.

Jam Up Twist USA (compiled with Deano Sounds)
The second volume of the Jam Up Twist series is to be released on the Traffic Entertainment label on Record Store day 2014 on 7 x 7” 45 vinyl.

Andy regularly appears in clubs across the world and his strong cult following has secured him constant DJ bookings including his 'Friday Fish Fry' residency at Joes bar in Camden every Friday & his Boombox night every last Saturday at The Horse & Groom in Shoreditch. 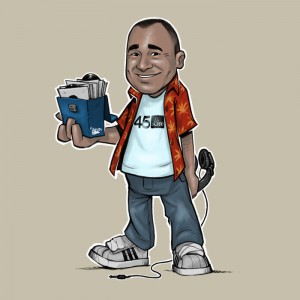