Music Man Miles (aka Miles Tackett)  is a Los Angeles native & in addition to being the man behind the Breakestra, he also is an all vinyl DJ covering sixties to late seventies funk, soul-jazz, &  vintage world rhythm sounds.

Though in the early 90s Miles did buy some jazz & funk vinyl & raid his dad's record collection to sample for hip hop beats he would make, it was not until the early 2000's after he had started Breakestra & had fully immersed himself in the L.A. underground hip hop dj community (mainly at his weekly Rootdown party) that he became inspired to try spinning records.

Being in the company of DJs like Cut Chemist, Egon, DJ Dusk & Mixmaster Wolf of Breakestra (a DJ as well), he learned the art of selecting & mixing vinyl records old & new. He also learned about a whole world of records that were not easily within most DJ's reach. Even though Miles had originally started collecting classic funky, hip hop/beat records to spin at his weekly Rootdown hip-hop party, collecting Funky soul-jazz/afro-latin funk records had taken over as his main passion.

Soon Miles decided to start a party in L.A. for himself, Egon & Cut to spin these sounds at that he named FUNKY SOLE. That was 17 years ago & Miles continues to throw Funky Sole & spin funk sounds from all around every Saturday night in Los Angeles when he's not out on tour with Breakestra or his current guitar based solo thing. He released a Funky Sole vol.1 dj mix cd a few years ago & is working on another at present.

Sole Travellin' is what he calls it no matter where he goes. 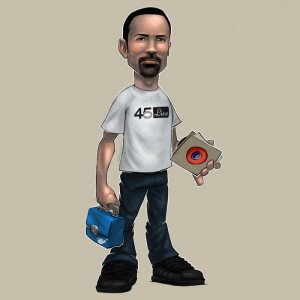