Ollie Teeba has been Djing Hip Hop, Funk, Soul and everything that falls in between since his teens in the mid-eighties. Starting out playing college parties and swiftly moving into a residency (before he was old enough to legally enter a licensed premises) at The Boilerhouse.

In 1993 Ollie met up with Jake Wherry and shortly after formed a production partnership resulting in the inception of The Herbaliser. Both avid vinyl collectors, Jake and Ollie began using the freshest sampling techniques, coupled with Jake’s musical know-how to create early demos for the fledging label Ninja Tune.

Since those early days, The Herbaliser have gone from strength to strength, collaborating with some of the most revered musical talents on the international hip-hop scene; notably New York Rapper and story teller Jean Grae, the Uk’s Blade and Roots Manuva, Dilated Peoples’ Rakaa Iriscience and the legendary MF Doom.

As well as 7 albums of original material and 2 ‘live session’ albums Ollie and Jake made the very well regarded DJ mix albums Fabric 26 and Herbal Blend for Solid Steel. Also Ollie’s ‘War of the Worlds’ DJ re-score was voted amongst the top 10 best mix sessions in the 25th anniversary of Solid Steel radio show.

The other significant project that Ollie Teeba is an integral part of is Soundsci. Founded by former Ninja Tune cohort Jonny Cuba of Dynamic Syncopation and ex- Mass Influence MC Audessey, Ollie became involved at the time of the first EP release ‘Dig for Victory’.

Soundsci are a boom-bap, beats and rhymes outfit consisting of Jonny Cuba and Ollie Teeba on production (with Ollie also providing much of the turntablism on the recordings), with Audessey (Mass Influence), U-George (The Hemisphere) and Oxygen (Sputnick Brown) on vocals.

In 2015, Ollie will be releasing his first solo album Short Order featuring collaborations with many of his familiar associates. Notably, Ghettosocks, Soundsci, and Jean Grae amongst others.

In his DJ career Ollie has played all around the globe at many notable clubs and festivals including Glastonbury, Harvest festival, Womad, The Big Chill, Essential, The Blue Note, Concorde, The Big Chill bar and Fabric to name a few. Delivering sets very much in the old school/classic era Hip Hop, funk/soul style.

A well known digger and record collector Ollie is currently featured in the Dust and Grooves book. and is known for impressive vinyl only sets at nights such as 45x45, Diggers Dozen, Vinyl Veterans and now 45 Live. 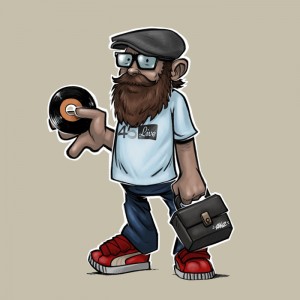