Jon More - one half of Coldcut and co-founder of the mighty Ninja Tune record empire - needs little introduction. A veteran of 80s Soul Weekenders and warehouse parties like Flim Flam he was harvesting crates for their wares whilst most other 45Live DJs were still at school. He also helped set up the pirate radio station KISS FM with Gordon Mac before teaming up with Matt Black to form Coldcut and their long-running mix show, Solid Steel.

The duo brought break beats and Acid House to the charts with their own creations whilst remixing Eric B & Rakim into Seven game-changing Minutes of Madness and giving the Godfather of Soul some payback. Being one of the hottest production teams of the late 80s dance explosion their success meant international travel and a chance to plunder all manner of rare records now at eye-watering prices for just a few dollars. It was here, with an eye for the obscure and an ear for the left foot selection that Jon honed a collection that stretches from African to Zither via Soul, Funk, Reggae, Rap, Salsa, Latin and all points in between.

Whilst the Ninja Tune label played the slow and steady wins the race angle through the last two and a half decades, Coldcut released several albums, countless remixes and their critically acclaimed Journey's By DJ mix - regularly quoted as the greatest mix album of all time. Still a regular digger both at home and abroad, Jon has a sixth sense for sniffing out vinyl in any given town and has been known to arrive at car boot sales before dawn armed with a torch! 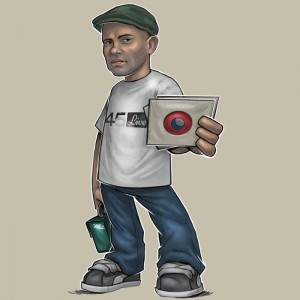