There's not many DJs that you can apply the term jaw-dropping to, but Mr Thing is most definitely one of them. Impeccable taste in music coupled with insane skills, ain't no thing like Mr Thing...

1. Where are you based?
Sunny Kent.

2. Why 45s?
I learnt on 45s as I only had access to belt drive turntables to start with, even with homemade slip mats and greaseproof paper underneath 12”s still made them drag so I used 7”s as they didn’t suffer with that and you could find them cheap in Woolworths then!

3. Your inspiration/mentor/hero?
My early inspirations were Jazzy Jeff, Cash Money, DJ Alladin, Babu, Rob Swift, Mista Sinista and DJ Devastate, Pogo, Biznizz and Cutmaster Swift amongst others from here, my friend Phil who I went to school with taught me basics of mixing and scratching and went from there. Lately been watching a lot of clips of DJ Koco from Japan and Boogie Blind, both incredible DJs.

4. Your most elusive 45, what is it and how long have you been looking?
Been trying to replace my stolen copy of Tony Alvon’s 'Sexy Coffee Pot' for about 15 years now, came close to getting another a couple of times but missed out by minutes both times!

And also Wizdom 'I’m So In Love With You' amongst many more...

5. Best ever dig?
For 45s definitely a spot out in Surrey a few years ago before my 40th, found a whole room of deadstock 80s and 90s Hip Hop/Soul/House etc with multiple copies, crazy and it made me ill with all the dust haha. Also the pre-record fair hotel digging with DJ Format and Andre DJOneOfAKind out in the states, didn’t know it was a thing and we were out until maybe 2am the day before the record fair we were going to!

6. All originals pressings?
Whenever possible, but if something’s just been released for the first time recently then I'm in.

7. Do you hoard or buy and sell?
Bit of both I do record fairs occasionally and I'm having a pre-house move clear out at the moment and also pick up anything I see cheap that’s good when I'm out and about looking!

8. How many 45s have you got and how do you catalogue/store them?
No idea how many 45s I have, it’s about 12 boxes and a long bookcase full, and then a few other cases full, but I'm trying to thin them out at the moment and keep finding I've got a few copies of things where they’re in no order at all yet!

9. Cover up or share the love?
It’s a tricky one, I think it’s down to personal preference of how rare the song is etc but generally I'm more than happy to share the knowledge unless I've just sampled it or something like that!

10. What're your top 3 LPs tracks that you wish had been pressed onto 7”?
One of them just got done recently by the good folks at Rocafort which is Melvin Sparks 'If You Want My Love', been taking the LP out to gigs for years!

11. Biggest disaster whilst DJing?!
Had a few over the years but the time I had to play on straight arm turntables and every single song skipped almost to the end within a minute or so has always haunted me, hate those things!

Ed's note: Thanks for highlighting the Don Thompson track Marc, the PUTS track is a treasured 12" :) 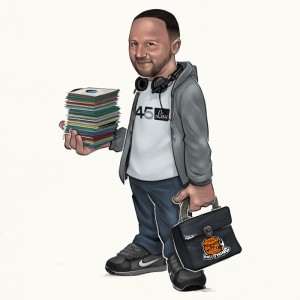