1. Where are you based?
Seattle, Washington United States of America.

2. Why 45s?
So many tunes were ONLY on 45 or some have different versions or instrumentals. Easier to travel with than 12"s and just all around fun to DJ with imo.

3. Your inspiration/mentor/hero?
For years it was Cash Money and Joe Cooley growing up in the 80's during those Supermen New Music Seminar battles but lately it's Koco aka: Shimokita from Japan.

4. Your most elusive 45, what is it and how long have you been looking?
Salt 'Hung Up' been after it about 25 years now. A few have copies have slipped through my fingers being a day late or a dollar short and some dealers didn't even offer because they thought I already had it :(

5. Best ever dig?
A writer that did magazine soul/funk music reviews dumped his 45's after 30 years at a local shop in the mid 90's all new unplayed mint promo copies of mega rare stuff because all he did was review them never dj'd. everything was $10 or less. Apollos Show Band, Soul Swingers, Black on White Affair etc.

6. All originals pressings?
For the most part but some things were never on 45 that get issued on 45 and are so good they deserve to be heard!

8. How many 45s have you got and how do you catalogue/store them?
At this point about 20,000 hard to keep in order when you dj out with them regularly. They are stored and shelved in boxes.

9. Cover up or share the love?
Sharing is caring. Music is meant to be enjoyed and some stuff is so rare even if you share good luck on finding it.

10. What're your top 3 LPs tracks that you wish had been pressed onto 7"?
Hmm.... would have to think about that one there's too many!

11. Biggest disaster whilst DJing?!
Mixer shorting out and equipment failure. It will look and make you sound like an awful dj and although not your fault the crowd doesn't know that and will assume it is. 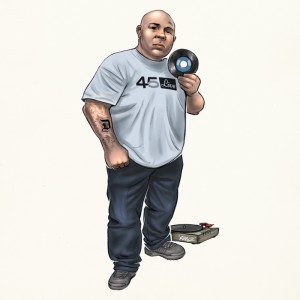 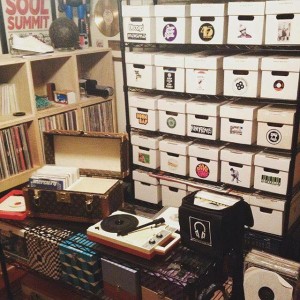