A.M. Muhammad
A: What Freedom Means
B: Tenderly
(Rain&Shine)

Dusty disco reissue alert! Let's give the brand new Rain&Shine forty-five a spin shall we?  We've had this New Zealand independant label in our hearts for a while now and we are always excited to see what comes out of the pressing plant from them and on this release we're more than a little excited. We're sure you will be too.

A.M. Muhammad delivers a stomping disco number in 'What Freedom Means' that screams liberation from the get-go. Jump-up percussion, disco finger slides, funky guitar licks, sassy backing vocals and the lead singer with attitude. This side has all this and so much more. On the flip 'Tenderly' we are treated to a moody soul cut where the vocalist lays bare his heart and soul and in the process showcases a real gem of a soul cut that rings true.

From Rain&Shine:
"Ishola Muhammad decided to adopt the A M Muhammad pseudonym for his second single, "What Freedom Means", in tribute to then leader of the American Muslim Mission (AMM), whose wise words had inspired the single. As this reissue of the rare single proves, the track has lost none of its potency in the 38 years since it was recorded. Muhammad's positive lyrics and assured lead vocal take pride of place alongside superb female backing vocals and a killer backing track that sits somewhere between rubbery jazz-funk and stomping disco. Turn to the flip for the doo-wop influenced sweetness of obligatory loved-up bonus cut "Tenderly". It's decent, but the floor-friendly A-side remains the killer cut." 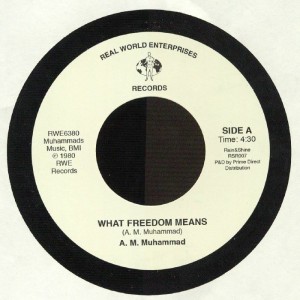