The latest installment of the Afro Funk Gems series from Nik Weston's prolific and consistently excellent label, Mukatsuku. First up is a trip back to 1970, just three years after Letta Mbulu escaped apartheid and moved the US (and fifteen years before she collaborated with Michael Jackson on 'Librarian Girl') the horn-laded, feel-good 'Mahlalela' came from her third album and was licenced by Tamla Motown in South Africa too for a rare as hen's teeth 45. Have you see one? I certainly haven't and didn't even know about it anyway! This is a one of the facts which makes this series so good, it's educational as well as featuring damn good sounds.

Flip for an edit from Mr Mukatsuku himself as he breaks down Dick Khoza and the Pelican Club house band's politically charged 'Chapita'. 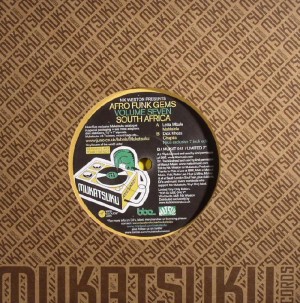