Swing open the doors! Pour the drinks! Turn it up! Lockdown is officially over and what better way to usher forth a new era than to soundtrack it with this utterly insane kaleidoscopic-rollercoaster-digi-pysch horror show of a 45! If the kitchen sink wasn't enough to throw at this, producer Alex Figueira has flung an entire IKEA branch at it! Frenetically bonkers from the very off, 'Maracas' will leave a mark on your brain that you'll do well to erase. But why would you even want to? On the flip, he summons the vocal super powers of Maddie Ruthless who lends her dulcet tones to this downtempo twisterella tale that has all the charm and indeed so much of the wild meanderings as 'Maracas' in so many ways. Check out both tracks in the stream below and then order straight from the Music With Soul Bandcamp page.

From Music With Soul:

Two and a half frenetic minutes that sound like Aphex Twin and The Incredible Bongo Band dancing Capoeira in the early hours of an illegal rave, somewhere in the deep amazon forest.
After the success of his first solo 45, Alex Figueira comes back to the aesthetics of the early Fumaça Preta, with an utterly bonkers 45 that can only be described as an “in-your-face acid macumba techno breakbeat funk freakout”.

The flip side contains a haunting Psychedelic ballad, with the sweet vocals of Maddie Ruthless, from NY’s leading Lovers Reggae sensation, The Far East. Equally trippy and beautiful, the soothing sounds of the Wurlitzer piano and the electric sitar will be bouncing in your head for hours after first listen. The kind of song that finds collectors dropping eye-popping sums, decades after the original release. Guarantee your retirement now by getting a few copies!

The song “Maracas” is the main theme of the movie “Maracas, tambourines and other hellish things” directed by fellow record nerds Matteo Fava and Dave Potsma. They managed to convince Figueira to play the main character, and later on, to do the complete music score. The movie tells the story of a struggling underground musician / part time record store clerk, whose music career is basically going nowhere until an improbable encounter gives his life a dramatic turn. They asked Figueira to give them something with “a fresh tropicalized take on Blacksploitation”. One might argue, after listening to the insanity carved on the grooves of this piece of vinyl, that he certainly did deliver.

The characteristic mix of synthesizers and heavy percussion used by Figueira in almost all his projects, gains here a somewhat freer dimension, embracing the chaos openly, without ever neglecting the groove, nor the ancestry axis. Values that are at the core of the label.

Even while laying down all the instruments himself, Figueira has managed to capture the same out of control tropical psychedelic spirit of his former band, Fumaça Preta. Fans of the group’s outfit will certainly be rejoiced by this new release.

Written, recorded, produced and mixed by Alex Figueira at Heat Too Hot (formerly known as Barracão Sound), Amsterdam, The Netherlands. 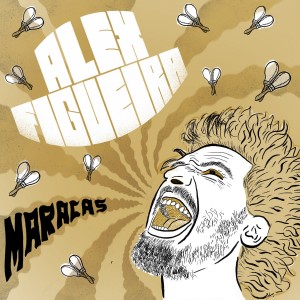