Andy Cooper 'Bring It To Me' (Soundweight)

Andy Cooper 'Bring It To Me' (Soundweight)

One of the most funkiest hip hop crews out there, Ugly Duckling, have been plying their trade for quite some time. Touring extensively in Europe and beyond, Andy, Einstein and Dizzy have penned hit after hit after hit and been a mainstay of DJ sets for years. Now Andy Cooper has struck out from the fold and written and produced his own track which is getting a timely release of 45rpm 7" single. NICE!

What is it? Well obviously it's a peak time, super up-tempo banger of course! A sure fire JB infused, bass bumpin', clattering break beat laden dancefloor slice of GOLD.

And for digital heads, you can get this and some other tracks for FREE from Ugly Duckling's Bandcamp page! Go HERE 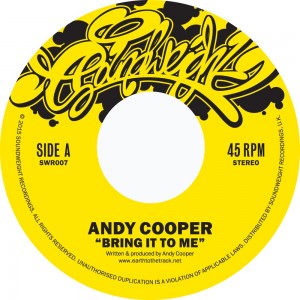