Matasuna is off to Mexico for this obscurity and has taken Apache's final track from the album 'Del Bumpin Al Hustle' to press on 45 (btw, look up the album on Discogs, bonkers sleeve design!). I've certainly never heard of this record before, and according to the blurb on Bandcamp, this track was the only funk tune from the LP. I can believe that, I've bought various Tex-Mex albums over the years which are absolutely awful except for 1 track that is absolutely brilliant. 'Liberate' got a 7" release in 1975 on the 'Kung Foo Chino' ep, but expect to pay some dollars for that.

Recorded in 1976, 'Liberate' obviously draws on US funk from the likes of Kool & The Gang in its arrangement and sound, especially on the horns. It's a solid funk joint, slightly shambolic but this just adds to its overall flavour. The flip features 'Hombre' with a Voodoocuts rework which has no sound sample at present, so I can only suspect that this will be good, he usually comes up with the goods! 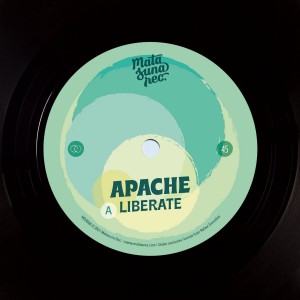