New label outta Naples in Italy, 17 Studio are about to drop release No. 2, and it's a double-sider of funk/disco beatage. Heading up the A-side is Bob Vito with 'Take A look', a disco-house side with a 4 to the floor doof doof kick underpinning some slick strings, sax loops, a particularly nice bass line, and many a disco element to complete the picture. It's more of an in-the-mix DJ tool rather than a standalone hit from the likes of Basement Jaxx for example, but don't let that put you off, it's a quality little number. There isn't enough good new house/disco released on 45 so this is a welcome nugget.

Flip over for what could be described as where the heat resides (what do you expect from this reviewer!). I LOVE El Perro Rojo's 'The Pusher', a super groovy, super friendly, super warm feel-good breakbeat funk head-nodding foot shuffler. If you're a fan of The Allergies, you'll be a fan of this one. Once again, it's erring on the DJ tool territory, and I'm pretty confident that DJs that rock doubles will be making sweet sweet music with this side.

The first release was back in Dec, one I sadly missed, with El Perro Rojo's 'Manamauè' being a Brazilian/disco/breakbeat gem. Look out for that on eBay/Discogs etc, and keep an eye out for forthcoming releases from this new label. It's worth noting that 17 Studio is primarily a design and visual communication studio that are indulging its love of music with this add-on, kinda like Lemon Jelly back in the 90s then. 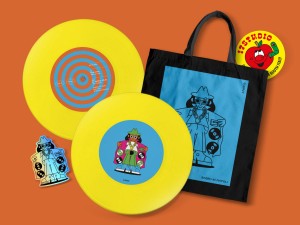