As a beat digger/record collector, to stumble across an epic unheard early 70s monster jazz funk fusion track is the stuff of legend. For the creator to originate in your home town, is rarer still. For that musician to still be playing with his big band every Saturday in the pub round the corner, was almost more than I could handle…

It was during one of my regular beat digging missions that I acquired an original copy of the Bobby Deans album.

I was aware of the THOR label already and had previously met the charismatic label owner, Glasgow music scene promoter and musician Harry Margolis. I knew immediately that to find a record on this label could potentially be very special. The seller remembered the day he got his copy of the album…. He and a friend were a fan of Bobby and his band and had gone to one of their Glasgow gigs. They were disappointed to discover that the eagerly anticipated

next. Determined to get their hands on a copy, the pair stayed out in Glasgow's city centre all night and first thing in the morning they headed straight to THOR Studios in St Vincent Street, knocked on the door and waited. Finally

after much pleading, they left, with two copies of the album in their possession. It is entirely possible that the album was never formally released and that these may have been two of only a handful to ever make it out of the Studio.

On skipping through the tracks at home, my hand stopped on a track on side A- titled Ho Ho Here He Comes. Even on hearing the first 8 bars I was blown away. I loved it immediately. I started to look for samples throughout the rest of the album and found some on another track. Later turning out to be my remix of Elephants Graveyard. In my

mind, I knew “Ho! Ho!” deserved to be released as a track in its own right. I began to search for information on the

artist and was amazed to find that the Bobby Deans Big Band currently played weekly to a loyal following at a local pub. I managed to get a hold of Bobbys number and called him explaining that I had found his old record and

wanted to re-release one of the tracks & my version of another. I sent him a CD with Ho! Ho! and my remix. He

recalled the session, recollecting that the drummer from Alex Harvey band had played session drums on Ho!, Ho! and that his father Mickey Deans, prolific UK jazz saxophonist had played along side him on Elephants Graveyard.

Invited by Bobby, I went along to the Partick Tavern and met Bobby for the first time. It was amazing to see the full ensemble including brass section with Bobby on Sax squeezed into the pub in Glasgow's west end. I could tell he was a character from our phone calls and was not disappointed when we met for the first time.
During the coming months seeking support and the right label for the release I came across the B-Line Recordings

Strictly Business EP and instantly knew that a synergy existed. Simon shared my love for the track and the story and an agreement was reached to carry out a limited run of 250 copies only, with my remix of “Elephants Graveyard” featured on the B-Side.

Only recently before this record was re-released, I happened to be listening to Herbie Hancocks album Fat Alberts Rotunda, and reading along with the back cover titles while playing the record, it finally clicked that “Ho!, Ho! Is a typo on the original THOR release & what I've been listening to on Bobby's album was actually a cover version of

Hancocks Oh!, Oh! Here He Comes. Not to take anything away from Mr Hancock, but Bobby & the bands version is an energetic, up-tempo approach, big & brassy in it's nature and for me, remains the best version I've heard.

On 10th Feb 2016 I went to Bobby's house to pass on the good news that the record was going to be pressed. His partner Janette informed me that sadly, that very morning, Bobby had lost his fight to lung cancer. He was 76 and played his last gig only a month before.

Jazz runs deep in the roots of the Deans family, his younger brother Michael is a successful Jazz musician in his own right and both brothers inherited their love of music from their father Mickey. I hope that it may be of some

comfort to his family to know that Bobby's work with this spectacular bands musicianship will continue to reach a new audience even after his passing. I never get tired of listening to Bobby & the bands work, so hope you will also share in the enjoyment, when you play this record.

The words below are an extract in Bobby's own words from the original LP sleeve notes:

“This record is a product of the hard work and imagination of a handful of creative Glasgow individuals. The tracks that you will hear on this record were recorded over a period of two weeks in November 1972. It was an operation planned with the precision of an army campaign and like all good armies, it retired to the local tavern to replenish its strength for the coming fight.

I could go on talking about the various things that happened on this recording, but the only way that I can describe the finished product is for everybody to have these twelve tracks as a personal album of my band. 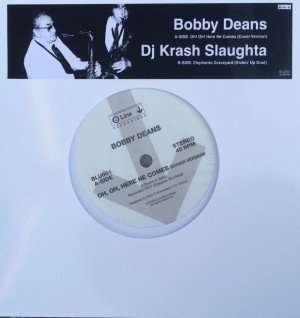