Brimming with assured confidence and with this 45 in hand, Del Gazeebo recently rocked up at Mrs.Robinson's stately home and rang the bell. As soon as she opened the door the Wah Dubplate logo on the sleeve of the record immediately caught her eye. He was invited in and what transpired next…well, you’ll have to ask Mr. Gazeebo! He left empty handed and more than slightly dishevelled but the good news is that Del Gazeebo’s version could be heard blasting from Mrs. Robinson’s home as he made his way down the street towards Wah Dubplate HQ. Job done!

Meanwhile, Aldo Vanucci’s version of ‘I Heard It Through The Grapevine’ adopts the sledgehammer effect. Mr. Vanucci doesn’t so much ring the doorbell but breaks down the door and heads straight for the living room floor. The soles of your feet will be begging for mercy once the needle drops on this 45 but your ear canals will be willing your brain to return the needle to the beginning of the record. A feast for the ears! 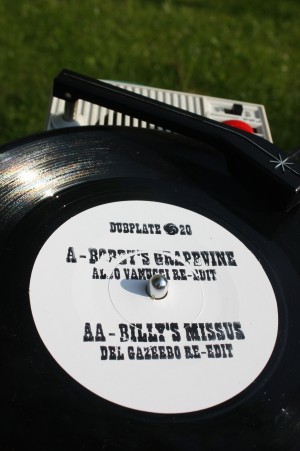