At the tale end of last year Bristol's Boca 45 heralded the 'Year Of The Donut' from the stately Boca Towers nerve centre slash production hub he's been operating from since the Summer Of Love (the second one). People thought he'd lost his marbles but his live DJ sets were so damn funky and on point that it was a relief to all that a trip to the funny farm was not required. At least not yet.

It's now become clear what Boca 45 means with that term and when you first hear 'Fat Back Boys' and 'Les Beats' you'll be waiting in line ready to join the Club too. He's rewarding all early uptakers with a personal handstamped 45 that is limited to 300 copies worldwide. Boca has confirmed that there'll be no download code, no discussion with Apple to have it rolled out in future iTunes accounts and no extra run for those who missed the boat.

Tailored for the modern DJ, Boca's Club Donuts Part 1 is an essential party starter sure to increase interest in subscription to Boca's Club when it drops. Boca's Club Donuts is a four parter and this first installment has us already biting away at our cuticles binge rocking Part 1 until news of Part 2 drops.

Hail the Year Of The Donut! The saga continues ... 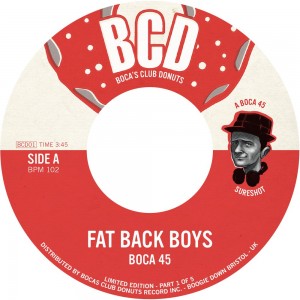