With Scott Boca 45 hitting the magical age of 45 this year the most obvious thing to do was call this album Forty Five, and to make it as a document of his life in music, drawing on the many collaborators he's worked with over the last 20 years. In doing this we get a kaleidoscopic musical experience, all facets of Scott's influences and passions shine through with shades of funk, downtempo, hip hop, psyche and soul all present in this autobiographical melting pot.

Naturally the very first single on 45 Live Records 'Soul On Top' is on here as well as a brand new track with Louis Baker 'Move A Mountain', a beautiful soul/beats joint. Also getting 2 cuts is longtime pal and collaborator Emskee from New York with 2 belters in the shape of 'Energy Boost' and 'The Roxy'. Fellow 45 Live crew member and world champ DJ Woody is naturally featured after their Bocawoody jaunts in recent years, and here on a new track 'Home Cooking' they let fly with a scratch masterclass over a jaunty, quirky and super funky beat. What is also strongly represented here is not what you might witness in one of his blistering DJ sets, but rather his love of down tempo, electronica and dark beats as expertly shown in 'White Blue & Red' which features Sergio from Kasabian, a beautiful, eerie number made even more beautiful with the Ben Salisbury's arrangements. A similar vibe prevails in 'Lonely' featuring another long term collaborator Gee Early who Scott made all the Malachai albums with, so of course this is class!

Overall, this is a fabulous album, flowing between styles with coherance and maturity. It's no wonder that Mass Appeal wanted to sign it. This is an album where Boca has hit his stride, constructed from a place of passion as opposed to trying to appease anyone or any 'fad', it's the sound of Boca in all his glory.

This baby hits the shops on 12th July. 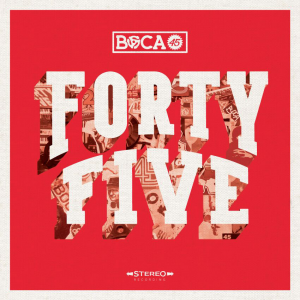