With a heartfelt and humble few words about whether to release this record or not in these crazy days, Scott reasoned correctly that the right thing to do is put this donut out as planned many moons ago. Music makers the world over are really going to suffer this year, not the million-selling super-rich artists of course, but ALL the people below them in the sales/streaming stakes. Artists who create music for the love of it, knowing that even in normal times, it's super tough to make a living making and selling music, so you have to keep going, right? I know full well that Boca 45 fans will lap up this latest donut without any judgement, in fact, it won't surprise me that by the time I've finished typing this review the Big Cartel store will already be sold out. Aaaanyways, to the music! Boca has long been a master of collaborations, using his charms to employ a very wide-ranging slew of singers, rappers, DJs and musicians over the years to facilitate and empower the disparate strands of Boca's musical output. This time around, it's the turn of legendary New York rapper Craig G from The Juice Crew who drops rhymes on 'Turn It Up Loud' with all the flavour you could possibly need, evoking the golden era vibes of New York City with musical backing from Boca that both references 80s hip hop/electro yet wraps it up in a production/arrangement that is very much now. Inventive, complex, confident and rugged and raw, the last two points being very essential to this reviewer, if it ain't got grit, it ain't got soul. Flip over for 'Blow Your Mind', introduced by another New Yorker and 6 Music's Huey Morgan, and this nugget is another complex BBoy/BGirl workout, no slouching around the production mixing desk here, this is Boca letting his hair down with a break-after-break-mega-mix packed with explosive moments that veer from head-nod to complete freak-out. I guess not really a song as such, but with 2 copies and some healthy skill levels, a DJ could make some magic with this. 5 stars, nab it now before it's too late. 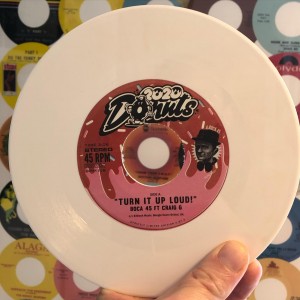