Bristolian stalwart, crate-digging fiend, creative powerhouse and master of the collaboration is back with number 3 in the 2020 Donuts series. Getting back into Boca's studio is Kelvin Swaby of The Heavy, Scott first met Kelvin at 6th form college in Bath, he says "There was a popular hip-hop crew there called Perno & Black, they were kind of local Bath celebrities and one of the MCs was Kelv. 10 plus years later, whispers came down the A4 that Swaby was no longer an MC, he’d become a HOT soul/funk singer. So in 2006, he jumped on three tracks on my 2nd LP 'Vertigo Sounds'. Then Stepchild, Swaby & I formed a live trio, The Boca 45 Experience and played a host of shows around Europe". I booked this show back in 2006 at another club night I run called Jelly Jazz, so I can confidently say that The Boca 45 Experience was hot diggidy dog HAWT! Anyways, that was then, this now, and Kelvin and Scott have regrouped and created what can only be described as a low slung disco joint, tight drums, phat bass and guitar licks aplenty all form a slick bedrock for Kelvin to shine upon, and he does exactly that with an assured soulful vocal.

Meanwhile, the B side, or rather an AA side sees another mega collaboration featuring The Bryan Munich Allstars (Geoff Barrow (Portishead/Beak) / Ben Salisbury, Billy Fuller (Beak/Robert Plant Bass Player), Jerry Crozier Cole & Ant Poploski), here they take on Badder Than Evil's 'Hot Wheels (The Chase)', probably one of the greatest break dancing/funk tracks ever made. Chock full of wide-open breaks (naturally!), a forceful and driving urgency, it's a beauty to put it succinctly.

So all in all, a rather tasty double A side that makes No. 3 in this series a must-have. Mind you, aren't they all must-haves? Check the teaser samples below and be ready to order on 1st June because they usually fly out. 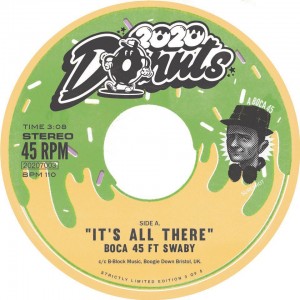