We continue our love affair with Melbourne's Choi Records with their latest offering from Brian Eldorado & The Tuesday People. Choi are now ten releases deep and with no sign of letting up they bring us two gems from this production duo. On the track 'Tectonic' the like-minded vagrants Brian El Dorado and label boss Ivan "Choi" Khatchoyan (Cookin on Three Burners, The Traffic, Choi Records) have cooked up a sonic psychedelic breakbeat assault that hits hard thanks to some hard as nails drums, some fuzzy bass and a haunting falsetto vocal all delivered at a frentic pace. A dancefloor bomb primed and ready for the clubs we feel. On the flip entitled 'Van Diemen's Land' the pair shine a light on police brutality and institutional racism. The message is delivered over a driving hip hop beat and a clever hook. Pull up a chair and listen close because Brian Eldorado & The Tuesday People have something important to say!

Available on preorder via Choi's Bandcamp. 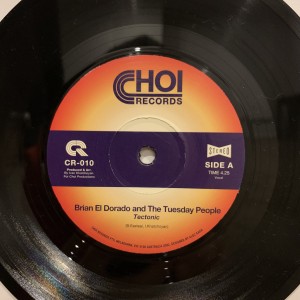