And just like that the Waxnerds roulette wheel has landed this time at Burley Chassis and with that news the room erupts and rejoices because they know what this news means and what indeed, if you can pardon the pun, this producer can bring to the table. They’re right on the money because as soon as the opening horn blast begins you know it’s a bona fide party rocker of a track that’s been conjured up by the Waxnerds noise bringer Chassis.

Flip over for as we catch our breath and depart to the lyricist's lounge and stoke the flames with this absolute burner entitled 'Mob Fire'.

Strictly limited to 250 copies, it's time to preorder the latest Waxnerds 45 and don't gamble on this hanging around after Christmas as it's bound to sell out well before then. 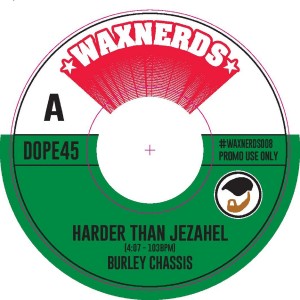