Razz-Ma-Tazz is an unissued 70's funky mover from Butch Williams one time member of The Heartbreakers and man behind the stunning modern soul 45 'Keep on loving me'. When the Heartbreakers disbanded he worked with several group around Louisville including, Enterprise & Razz-Ma-Tazz neither released any records, but recordings were made. Tape was assumed lost but eventually turned out and  was duly dispatched to me and I in turn sent down to Alberto Folpower Zanini at Cannonball Records, after much work to edit a 6 min track to a 45 version, balancing stereo and mono parts of the tape and rearranging horns sections and congas, the job was finished. The results are fantastic, a midtempo oh so soulful winner, with a little bit of a funky edge, that the title belies. Another killer for 'The Little Label With A Big Heart'.  - Dave Thorley

Over to the Cannonball release.....many of you will know Willie Wright for the fantastic elusive self-produced version of Mayfield's "Right On For The Darkness". During his career Mr. Wright composed literally hundreds of songs and studio sessions, mainly in acoustic with just his voice and a guitar, which never came to light. Mr. Wright and his lifetime mates at Green Coil Records have entrusted our Imprint to release and arrange this catalogue of unissued gems. One of these is an acoustic version of Bill Wither's "Ain't No Sunshine"  we are proud to serve you as rough as it gets on one side of this release. On the other we did our best to craft our angle on a possible arrangement of the tune, which was originally one-track recorded in a Nantucket's basement using minimal recording equipment.

500 issue copies will be available for Razz-Ma-Tazz

300 issue copies will be available for Willie Wright

Please place your order by following this link, direct to the Cannonball website;  http://www.cannonballsoul.com/releases/

Wholesale is welcome and can be arranged via email at cannonballsoul@gmail.com with well known and respected bulk sellers.

Registered post is extra so please ask for a quote before completing your payment. We’re not responsible for parcels that go missing if a package is sent unregistered. 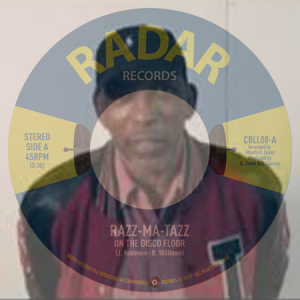 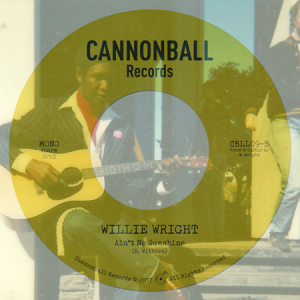