Yesterday Choi announced the release of his debut hip hop 45 and well, it's news we welcome here with much fanfare. Having charmed the pants off us with his funky dancefloor cover versions with The Traffic it sounds as if Choi had this concept under wraps for some time. 'Hip Hop Saved My Life'  features Detroit's favourite son emcee Guilty Simpson so you know the tight production is met with impeccable flow from this Stones Throw artist. To borrow Guilty's line it's "real flavour" and a "unique sound" rolled into one.

On the flip the interstellar efforts from man like Space give this track some real meaty boom bap weight.  The tempo drops which only gives the remix a moody, slightly unnerving vibe. A mean, gas-faced synth bassline underpins the Guilty raps and has us bringing the needle back to the start.

Here's the announcement that came from Choi yesterday:

"I have been sleeping on this material for decades really. I am really excited and anxious, but finally I am able to release some hip hop on 45!! So here it is, my debut hip hop 45! CHoi - Hip Hop Saved My Life feat. Guilty Simpson. I have to mention the amazing photo I used was taken by the late DJ Kuya and used for the cover (with permission of course). Layout and artwork by Alec Kach. Big Thanks to Guilty Simpson for wanting to be involved he nails this. Big thanks to Thando Sikwila for jumping on Bv duties. Please check it out and enjoy. Was fun to make."

The digi pack contains instrumental versions of both tracks.
Public Service Announcement: You need this life saving 45! Head to Bandcamp after the stream to secure your copy today. 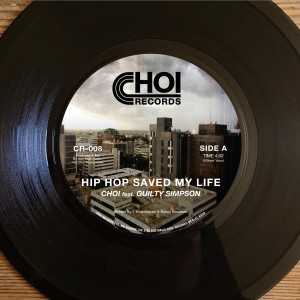