Chrome
A: Dopamine Hit ( I Need A Hit remix by Smoove)
B: The Big Apple
(No Half Steppin')

If there's a time to bumrush the charts for MC producer Chrome it's now as he hands the reigns to 45 Live's Smoove to intravenously inject the feel good vein throbbing funk factor that we're accustomed to hearing from the Wack Records main man. Be warned though as you'll probably need to book an appointment to have the headphones surgically removed because they'll be stuck to your plugholes with 'Dopamine Hit' on repeat for days.  Cautiously inject this into your music box of choice with care and press play for that instant relief.

Chrome ,who we know is ably equipped with mental hardware, returns to the boards on the flip for'The Big Apple' . He handles the cuts aswell as the rhymes  and we're treated to some upfront rap as Chrome pays tribute to the sounds of his youth that originated from The Big Apple but flipped in his own unique style for 2019.

The 45, limited to 300 copies is now available for preorder from No Half Steppin' records here:  https://chrome.bandcamp.com/album/dopamine-hit-remix-ep 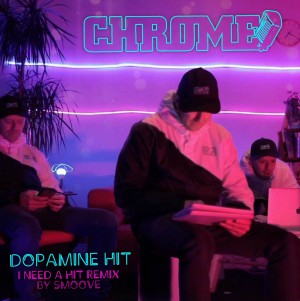