You might recall a scene like the one I’m about to describe. In a dimly lit room a dedicated crew of b-boys and b-girls begin to warm up the crowd with some flamboyant uprock styles over sections of cardboard that were fused together with whatever adhesive was at their disposal. The DJ in the corner spins breaks that you feel were tailor made for events like this but so often precede the hip hop culture. Breaks like Coke Escovedo’s ‘I Wouldn’t Change A Thing’. It’s a foundation record for any b-boy and any DJ who spins for the breakers should have it in their crate. Lifted from his second LP ‘Comin’ At Ya’ released in 1976 on Mercury Records and produced by Patrick Gleeson, this Johnny Bristol penned rare groove classic is now officially reissued on 45 through Expansion Records. 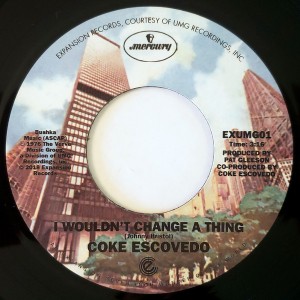