Super prolific with the utmost quality, Mukatsuku continue with one of their 'series' releases, and here with volume 2 of 'Columbian Latin Funk & Cumbia Gems'. A bit of a mouthful, but it's a bit of a 7" full, with 2 top drawer tunes from Fruko and Combo De Los Galleros. When it came to Latin sounds, UK club culture throughout the early 90s was predominantly salsa based with boogaloo and latin funk too, mainly from North American cities like New York and its melting pot of peoples from all over South America mixing with blues and jazz artists. But the music of Central America in its more pure form has been lapped up for a fair number of years now after being introduced into UK club culture in a significant way by trailblazing DJs like Quantic and Nicodemus and labels like Soundway, Sofrito and those amazing comps on Vampisoul - The Afrosound of Columbia - amongst others. I've often marvelled at how popular these sounds have become over in Europe, culturally it's very different, at least to nothern European ears, but there is no denying its energy and straight up power. Fruko in particular can weave the most exciting songs, horn-heavy and packed full of dynamic percussion and wonderfully produced in the studios of Discos Fuentes. Throw a Fruko song on and watch the dancefloor ignite, with 'A La Memoria Del Muerto' being a prime example. Great to have a 45 of this, thanks Nik! 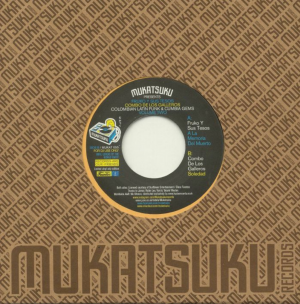