Computa Games return and they're fully charged. On this release, producers Quickie Mart and Kung Fu Chris pay homage to the early days of the hip hop movement and the endless rolls of sticky tape to keep the cardboard together to break on. 'Rock Creek (Revenge)' forcibly drags you out of the office block down to the plaza below to pop and lock until your brain is convinced that you are in fact triple-jointed, such is the commanding dexterity you always knew was there.

Flip over for 'Apache 3000', an uptempo sample laden B-boy musical proclamation that's sure to expand the width of your laces before your very eyes and turn your swooshes into stripes!

Available to pre-order from Juno Records or Bandcamp. 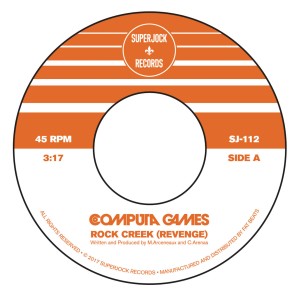