On your marks and get set! German record shop and label HHV are now up to their third release in the 'HHV Boombap 45's series' .  This time around they shine  a torch light on a boom bap classic from Dray and Skoob better known as Das EFX. Most kids from a certain era will remember the video for 'Real Hip Hop' exploding on their T.V. screens once a copy got shipped to the 'Yo! MTV Raps' studio in the mid 90's.  Shot on location at the Isle of Man TT races , the video features both Dray and Skoob pulling wheelies and other Evel Knievel inspired moto craziness.  The track was originally produced by DJ Premier at the house of hits Works Of Mart studio which is what you get on the A side. The B side however focuses on another of hip hop's most celebrated producers Chocolate Boy Wonder Pete Rock who blesses the track by underpinning the duo's vocals with a striking bell toll and of course his own vocal drops throughout.  Highly recoomended and of course it's the first time the release has been pressed on 45! 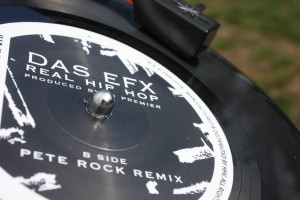