Dego 'Drop It Now! Pick It Up!' (Sounds Familiar)

Sometimes a record comes along that one will instantly recognise as a cut-above, peak wickedness! This is one of those from the legendary multi-instrumentalist, Dego.

With a CV that screams class, Dego has been at the forefront of electronic music and a leading proponent of the West London sound, Broken Beat etc. From 4Hero and working with the likes of Kaidi Tatham, Bugz In The Attic, Quantic, Kyoto Jazz Massive amongst many many more, Dego's deft touch in writing and production oozes confidence and purpose. He has been a kingpin in the studio throughout the years, and his output is quite frankly phenomenal.

I only just became aware of this record as one of the 45 Live crew selected it as his choice in our yearly 'best 45s of the year' roundup. As soon as the first couple of bars went by on first listen, it was a case of 'yes, I'm having that'. The A-side 'Drop It Now! Pick It Up!' is a spectacular continuation/progression of the 'broken beat' sound, one that isn't too broken, but takes all the best elements of that 90s sound and brings it bang up to date and in doing so, makes it sound so fresh. This is house-not-house boogie funk of the highest order, jerkin beats with upfront handclaps, inspired synths and laid back vocals, it's a song that literally throws shapes, dancers will love it.

Flip over for an equally killer tune in 'Too Humid'. This one tightens up, but still exudes Dego's signature production flavour. A touch more house, with a wide-open laid back vibe, it's all about the teasing synth riffs constantly pulling you one way or another, the effect is actually quite intoxicating.

Both tracks are singularly perfect, a mature sound from a legendary producer and right up there as one of THE records of 2021.

I noticed Nik at Mukatsuku showing some love for this today and regaling a story about chatting with Dego on the underground in London one day, asking if he'd like to release a 45 with him, with Dego saying something along the lines of 'nah, not into 45s'! Well, thankfully he's softened his position on the format and released this absolute gem of a single. 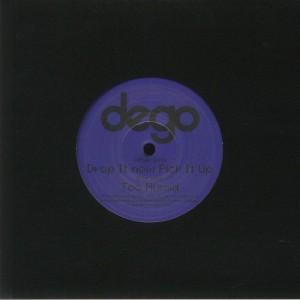