We're kickin' off 2020 by focusing on one of the most important Gospel Soul labels to ever exist. It's a 7" single spotlight on the mighty;

Join us on Wednesday 22nd January 2020 @ 2pm US PDT (10pm UK GMT) on dublab.com for a rundown of some of the finest music featured from this amazing catalog.

In short, and I quote;

"In 1959, a woman by the name of Carmen Murphy attended a Good Friday mass in her home town of Detroit as she did every year. Ms. Murphy, the proprietor of the city’s first salon for black women, known as House of Beauty, found herself particularly moved by the musical performances that evening. In fact, she was so inspired that she decided to convert the basement of her salon into a rehearsal space for local gospel acts. Later that year, she funded the recording of local gospel star Rev. James Cleveland, and House of Beauty Records was born.

Over the years House of Beauty was owned and operated by a number of different parent companies. It was during it’s time at Scepter Records in New York (’64-’76) that the label grew both commercially and creatively. It slowly transformed from a rigidly traditional label, mostly featuring a capella quartets and choirs, to a company with eclectic tastes and broader musical horizons. Throughout the 70s the label became more accepting of secular influence on its music and slowly but surely, some of the recordings became straight up funky."

We're running deep into this amazing body of work....pull up a chair, grab a pen....it's music you might not have heard before! 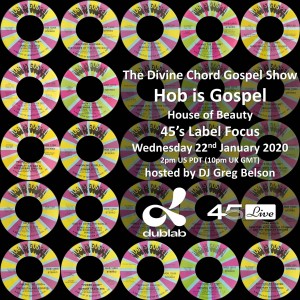