DJ Bacon
A: Back In Hell
B: Sure Shot
(DJ Bacon)

DJ Bacon, having conquered the DJ world (at least in his part of the world which is Brisbane, Australia), adds producer to his list of credits on this, his debut 45. And what an incendiary slab of wax to introduce DJ Bacon. Merging what must be the most revered hip hop group of all time in Run DMC with that minimal hard rock sound that we're accustomed to hearing from them thanks to their creative partnership with Rick Rubin. This sound underpins so many classic Run DMC rhymes. That devastating distortion comes from rock heavyweight's AC/DC this time around. Add in some clever cut n' paste action, some quick fire scratches for effect and voila!

On the flip he tackles the Beastie Boys and merges 'Sure Shot' with the Queen Of Soul's classic cut 'Rock Steady' and it works so well. Both sides in fact need to be in the DJ's secret weapon stash and unleashed in order to kickstart even the dreariest of functions. Available now on hellish red vinyl and housed in a picture sleeve with our heroes from Queens depicted returning from the fiery underground. Order today through  DJ Bacon's Bandcamp page:
https://therealdjbacon.bandcamp.com/ *

* By the time of print, the first pressing sold out with the second pressing down to a mere 29 copies. Be quick and secure your copy today. 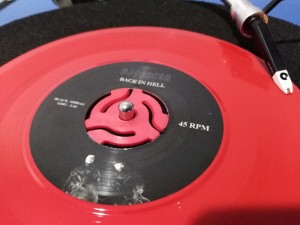