Fast becoming my favourite beats label of right now, Mountain 45s have unleashed this and another absolutely wicked 45 from The Gaff and Double A for a double drop of cut n' paste gold (see Baz's review of that one).

You know when you hear something that has got it right, an instinctive combination of samples, beat making, arrangement, and production that unites perfectly. Mountain 45s have so far created this perfect audio stew on every release with this 3 tracker being no exception.

Kicking it all off on the A, Double A presents 'The Game', a top drawer hip swinger of a breakbeat spiced up with multiple flourishes expertly picked and spliced. Just like cut 'n' paste kings like Katalyst, Double A has injected so much flavour and elemental interest in equal measure to give us a track that satisfies both the dancer and indeed the DJ for its sweet mixability. In the bag, and staying there!

But that's not all, flip over to the B and DJ Fleg gives us 2 wonderful grooves. 'Dimension 5' is a superb breakbeat jazz bomb, maybe more of a ditty than a fully-fledged track as it's painfully short, but certainly long enough to drop into the mix. The same could be said for 'Latin Escapades', a super tight thematic excursion that is PHAT AS PHUK. Personally, I'd love to see these 2 tracks extended to a full A and B side 45, DJ Fleg has got certainly got The Sound and The Flavour exactly on point, and that's more than half of the battle.

So once again, another Mountain 45 that rightfully deserves a place in your crates, and it will sell out, you know what to do. 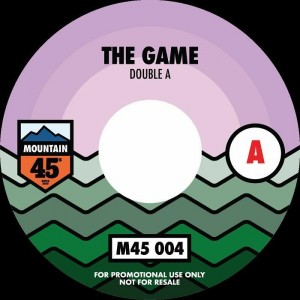