We have been having a wager here at 45 Live on what age Dr Rubberfunk actually is. The average that the staff are coming out with is 78 which we're hoping Jalapeno Records can answer in due course. His 'Life at 45' series enters it's fourth decade with this release and with every release he just seems to come with a new bag of tricks!

On Boom! he rounds up seasoned Northern monkey John Turrell to help out on vocal duties and between nuff bickering and tantrums they've managed between Tuesday tears and Wednesday woes to conjure a low slung southern style funk hot dripper with enough guff to shock the muff off the buffest macho woman in town.'Drummin' In'  is a stripped down open drums DJ tool that will come in handy for those who like to juggle doubles in their sleep. The real charmer on this bumper pack 45 though is 'Steppin' In' with that effortless summer breezy steezy reminiscent of George Benson's strumming style over a funky back beat.

Keep on keepin' on Doc, we are still in love with your life at 45. Available right now on Jalapeno Records HERE. 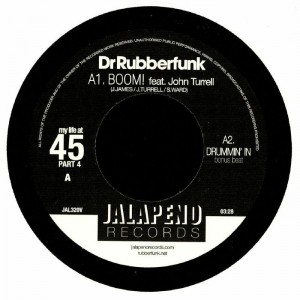