The fourth release of Dusty Donuts crew celebrates the 10th anniversary of the cult breakers hit "The Antique Anthem", for the first time on 7" format. On the flipside comes a brand new B-Boy banger from the two world nomads “Make Your Move”.

Marc Hype & Jim Dunloop are the unique combination of the highest art of DJing, turntablism & piano game. The two-time German champion of the International Federation turntablist stands with his partner in crime, the studied concert pianist Jim Dunloop, since 2004 together on countless stages of the world. They have collaborated on numerous releases on international labels and
released an album on the legendary MPM Records. 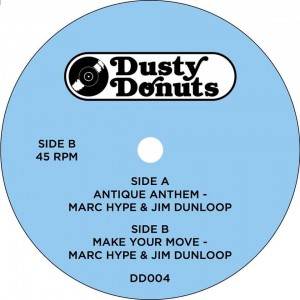