It's the middle of September and Mr Eli Paperboy Reed​ has just begun his European Tour of 2015.....bringing his own brand of dynamite soul, hard hitting blues rhythms and funk beats, all blessed with a gospel touch. Towards the end of the month, he brings his band to the UK and let's just say, you really don't want miss it if you're a fan of such music. He'll be showcasing heavy duty new material from his amazing new album, as well as performing the songs that have won him fans the world over. DJ Greg Belson from 45Live is providing support for these set of dates, so he'll be warming up the crowd for the vocal onslaught you're about to witness. Book your tickets now....this really will be somethin' else. 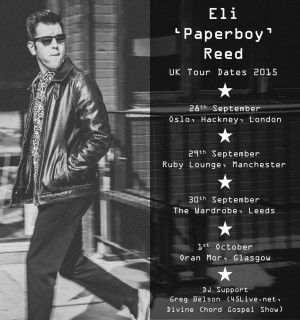