Eric B & Rakim - Eric B For President (King Underground)

Eric B & Rakim
Eric B For President
(King Underground)

We have put off gushing over this release for far too long. Putting it on the long finger was never our intention so without further ado it's time to present to you a project from King Underground that leaves others in the dust. It's what we have come to expect from the label who never cease to compliment the incredible music with the deluxe package every time.

Released at the tail end of 2021, 'Eric B For President' is now available on glorious 45. The label took the long way around getting this into the racks though. That's in part due to someone in Universal's archive department misplacing the original files and with the master versions over six minutes in length the King Underground producers had their work cut out to squeeze the track on to a loud 45. We cite the phrase 'classic' too regularly but this Eric B & Rakim cut deserves the crown. Five mic steez no question. What's more you'll find 'My Melody' on the flip. Need we say more? The bundle also features a t-shirt designed by Keshone. Available wax in limited runs on black, yellow, and blue vinyl with the label artwork lovingly recreated by Danny Roth Designs. Essential business from King Underground.

KingUnderground · Eric B. (Featuring Rakim) - Eric B. Is President 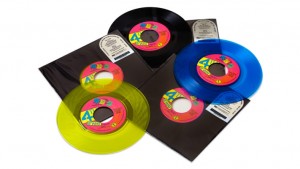