Eddie Roberts is hands down one of the UKs finest guitarists who's risen to fame through the wonderful and longstanding New Mastersounds. Now a US resident, the UK lost Eddie's pressence here a number of years ago as NMS gained an ever growing and passionate following stateside. Touring coast to coast relentlessly, the band enjoys a cult following and large crowds at prestigious venues like The Filmore in San Fransisco. Through these tours, Eddie has embedded himself into the US 'Jam Scene', playing and recording with a multitude of musicians from many well known and underground bands like Pimps Of Joytime, Orgone, Soulive and many more. Obviously with the talent on offer, things are going to stick. So when the phenomenally good drummer Alan Evans stepped in for NMS's Simon Allen one time, a musical union was formed with a shared love of a particular sound and vibe and Matador! Soul Sounds was born.

The A side 'Get Ready' is very much a statement of intent, they are saying 'this is how it's gonna go down', and boy do they throw it down. A relentlessly funky soul jazz groove that borders jazz rock, swirling organ, heavy heavy heavy drums, driving bass and Eddie's syncopated wah wah driven guitar work all cramming huge amounts of energy into a perfect 2 minutes and 55 seconds peak time 7". It kinda remind me a little of the killer early Brand New Heavies joint, 'Snake Hips', where funk meets rock meets soul, and naturally there's some NMS flavour in there too. The flip 'Mr Handsome' is channeling the vibes of The Meters, a much more bluesy (and funky) jam led wonderfully by the organ licks of Chris Spies and containing a solid Bernard Purdie-esque open drum break from Alan, oustanding musicianship from all concerned.

The band makes their official world debut at Live For Live Music’s Brooklyn Comes Alive this Autumn. This debut single is due out on the same day via all streaming services, and of course what matters to us, a limited edition A side/B side 7-inch pressing!

Until there is a proper listening link, you can catch a glimpse of 'Get Ready' on the Matador! Soul Sounds facebook page: www.facebook.com/matadorsoulsounds/ 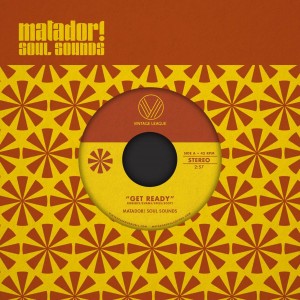