It’s not very often that we exclude a Bad Breaks forty-five from the play box and this, the fourth release on the Austrian label, will only strengthen that mindset thanks to another batch of DJ friendly cuts tailored for the modern dancefloor. Having bum rushed the 45 charts five years ago with their debut smash ‘Soul Is Free’ by producer Flip, the Bad Breaks team have sharpened their production tools with each subsequent release, proving themselves to be a label to count on each and every time.

On volume four, the listener is once again treated to two dope cuts with both Flip and Chill-Ill sharing production duties on each side. On ‘Like A Champion’, Flip jets off to the island for some heavy, heavy JA vibes from Buju Banton but with that sunshine Bad Breaks signature splash to keep the dancefloor busy. For ‘Now Hear This’, producer Chill-Ill joins forces with BK veteran Talib Kweli for a reggae-tinged rap attack that will have heads bobbin’ and necks snappin from the Lyricist Lounge to Linz and all points in between.

Out now on glorious 45 from the Bad Breaks label HERE. 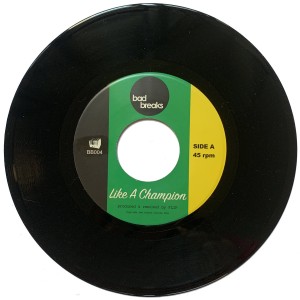