In an age of stay at home creatives in the form of producers, deejays and emcees, there's been a slew of material which falls under the banner of being 'absolutely bloody essential'. This debut release for Gee Bag on Dinked certainly deserves to be considered as such. We are also in an age of the Black Lives Matter campaign. Step up Gee Bag who, alongside Illinformed combine to forge a soul-tinged head nodder to highlight the issues in the U.K. Gee Bag's rapping style is a perfect match  for Ill Informed's perfectly timed chops and it's a partnership we are hoping to hear much more of. The flip has producer Sam Krats conjure up a jazz-fuelled boom bap sureshot for our man Gee Bag to flow over.

From Dinked:
"Dinked Records is proud to announce the release of Foreigners by Gee Bag on a limited 7" with picture sleeve in early March. Taken from Gee Bag & Illinformed's 2020 long-player "Respect Ya Elders!" (Revorg Records), the single is backed by an exclusive remix by Sam Krats.

The original track matches a laidback guitar riff with Gee Bag's unique style of storytelling and a narrative in which he explores the experience of being a foreigner and facing prejudice and racism without losing his flair. The Sam Krats remix takes the track up a notch with an added energy supplemented by Krats' trademark atmospheric soundscapes.

In recent years Sam Krats has cemented his reputation in the domestic and international hip-hop scenes, with his intriacate, layered production style. His beat-making chops have gained favour with many of the New York underground's most celebrated artists, including El Da Sensei, Ruste Juxx and Neek The Exotic."

Available for preorder from the Geebag Bandcamp page. 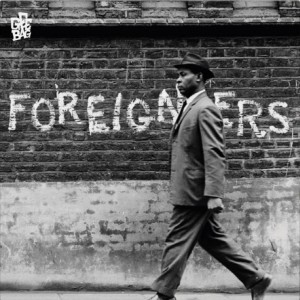