We have come to expect nothing less than sonic perfection from this label and with this release from Group Modular that box is emphatically ticked. Following up on last year's 45 entitled 'The Tunnel' we take a trip to the nerve centre of Group Modular where they see and hear through a psychedelic fuzzy-folked funky lense and spew out the spooked out synth soundings we have grown to love from this duo. They comprise of Delights label boss Markey Funk and his production partner Mule Driver. They both have a mutual fascination in moody pysch funk tracks and on the evidence of 'Per Aspera Ad Astra' they will garner futher praise for their cosmic compostions.

The 45 will be released on August 12th through the Delights label. Stream 'Per Aspera Ad Astra' below and pre-order after the stream. 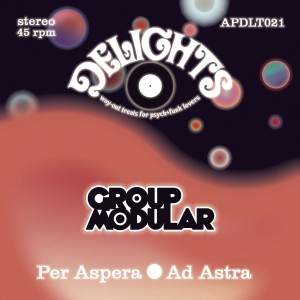