Haynsey feat Jabbathakut
A: Who's A Big Mouth?
B: Daddy Sets Off
(Wah Wah Dubplate)

The wonderful world of the reclusive Belgian Willie ‘Wah Wah Dublate’ Jenkins and his dedicated team of neurosurgeons and chocolatiers continue to broaden their horizons into the world of recorded music with news of their latest project. Both Haynsey and Jabbathakut fancy themselves as neurosurgeons and chocolatiers respectively but it could be argued that their true strengths lie in penning a hit record. This is where Willie and his able bodied men come in. Once all the beats are rhymes are fused together the production is mastered to within an inch of it’s life by the Wah Wah Dubplate team of experts to convert the product into a number one hit.

How do they do it? It’s a secret formula handed down through the Jenkins family for generations and he remains tight lipped about the secret to Wah Wah Dubplate’s success.

Juno is the place to head to cop the forty-five but be quick. They always fly out. 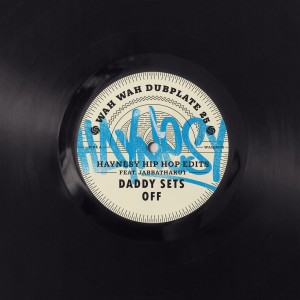