Can we just say from the outset that we feel it's no easy feat to pay homage to the Thin White Duke but leave it up to Melbourne's Jahrukus to step up and present to us a reggae version that even DB would surely approve of. Constructed with dibby dibby love and an ear for the what makes a vibe , the group deliver a heavy heavy version excursion that has already cemented itself in the summer play box. On the flip 'Island' Girl' , they invite Kingston's late Bunny Rugs to garnish the track with his unique vocal style for this the group's first original track. Hit the Soul Messin' Bandcamp page after the stream to secure your copy today.

The A side sees Jahrukus pay respect to the late great David Bowie with the world’s first reggae inspired cut of 1980 classic “Ashes to Ashes”. Recorded above a smash repairs shop in the south of Melbourne between 1-5am (after gigs but before the shop opened), the idea to take on a cover song was premised by a fan at a live shows who said ‘this band is so good you could re-work any song into a reggae jam’. 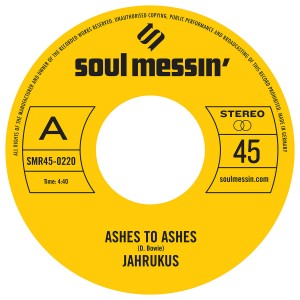