Jo Ann Hamilton & The Kevin Fingier Collective
A: September
B: I Love Without A Love
(Fingier)

Argentinian label boss and producer Kevin Fingier knows his onions when it comes to cherry-picking the perfect track to add to his badass record label and this sensational slice of Northern soul from Jo Ann Hamilton & The Kevin Fingier Collective picks up where his last forty-five left us. Where did it leave us? Wanting more of course! Much more. The time to welcome with open arms the dulcet tones of Jo Ann Hamilton is here. It's music to shuffle to, to groove to and most of all to release those organic serotonin hormones buried in our lockdown weary brains. Pick up this forty-five today for the webshop and lift your mood instantly!

From Fingier:
"After the stunning success of his last single, the Argentinian producer Kevin Fingier discovers Jo Ann Hamilton and produces two killer tracks for the Northern Soul scene. Jo Ann Hamilton, from Georgia - USA, was born and raised around Soul and R&B music, Motown Records was the soundtrack of her childhood. Inspired by Diana Ross & The Supremes, she started to sing at the age of 7 and became part of the Gospel Choir from the 'Melton Chappel' church. In the mid 70s Mrs Hamilton became part of the Disco scene and almost 50 years later, the universe joined her and Kevin Fingier in Buenos Aires, Argentina to create this amazing piece of vinyl. Calling this a ‘Double Sider’ wouldn’t be enough, it has two monster tracks, two heartbreaking tunes with that 60’s sound we’re getting use to receiving from Fingier Records. The A-side presents ‘September’; a monster Northern Soul track which could have been made in the 60’s and become a classic in the Wigan Casino days. On the B-side we have ‘I Love Without A Love’ - killer R&B; obscure, exotic and very funky. Jo Ann Hamilton’s debut single with The Kevin Fingier Collective will be out April 23rd and the release is limited." 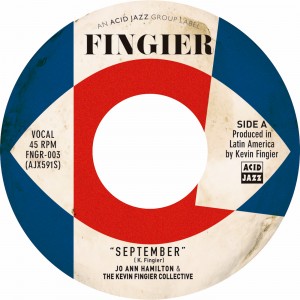