Woah, epic fusion release from Mukatsuku as the 1977 album from Argentinian Jorge Navarro gets unearthed and mined with 2 cuts pressed up to 45 for the first time. The A side 'Funk Yourself' gets going as a pure jazz funk fusion track that you'd expect on like the likes of CTI, Mainstream etc, but then drops into a Latin groove with breaks before heading back into jazz fusion, it's a monster! The kind of track that would have been (and maybe was) big in the rare groove/acid jazz scene in the late 80s and early 90s, but it's a new one on me and once again Mukatsuku have educated and satisfied that desire for killer new music at the same time. Head to the B side and 'Repartamos El Funky' is a downtempo jerking spacey nasty face fusion groove of the highest order. In a landscape where hip hop, beats and edits seem to rule the 45s spinning DJs play boxes, it's refreshing for a new (reissue) of this ilk to come out and add some flavour, and some JAZZ to your sets, it will definitely be added to mine. Recommended. 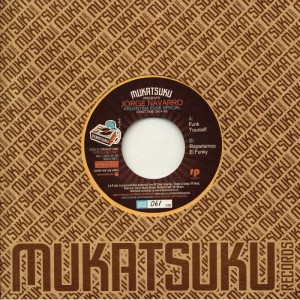