While Jorun Bombay's radio show 'Funkbox Reload' continues to attract eager first time listeners and in doing so outing what has been the scene's best kept secret in terms of fresh ish for the airwaves, his recorded output whets the appetite of wax spinning DJs who know their onions. His latest double sider for the Soundweight label continues a relationship that was forged back in 2014 for the label's fourth release which was Jorun Bombay's superbad 'Funky Drummer' edit. On this 45 our hero pays tribute to the nascent scene on 'Rapture'. Lovingly reconstructed for the twenty-twenty thanks to a so so def ear for the funky things in life, it's another sureshot for Soundweight. Label artwork is handled by the super talented Mr. Krum. 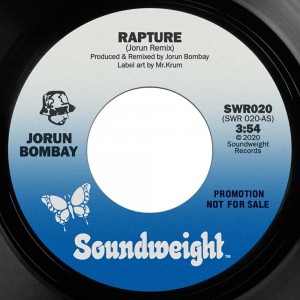