This forty-five has been on almost constant rotation here at 45 Live and for a myriad of good reasons. It's safe to say that anything that Kevin Fingier has a hand in needs to be heard. On 'Um Brilho Novo'  and  'Rua Nova Barão' he enlists vocalist Josi Dias for a new series entitled 'World Got Soul' on his label Fingier and it's a path we're intrigued to hear much more of from The Kevin Fingier Collective.

Here's what the label had to say:

Acid Jazz are excited to share with you the new 7” by our subsidiary label Fingier Records. So far The Kevin Fingier Collective (Argentina) has sold out the first three singles they’ve released (Last one sold 1500 copies in just one month) and we’re very excited with this new one which is with the Brazilian singer Josi Dias.

The best selling Soul artist in the UK Mod and Northern Soul scene is from Argentina. Who could have thought that? He’s been producing records that have been sold out by the hardest and purist side of the Northern Soul and R&B scene. One of the reasons why that happened is because he is a Mod himself, but he’s also a producer, DJ and an engineer. In his studio, he developed a 60’s sound with a big identity which the Soul scene felt identified with.

Now after three releases in what we’re calling ‘The Classic Series’, Kevin created a new series for his label: ‘World Got Soul’. A new series where our Argentinian producer will release Soul records but mixed with traditional music from around the globe.

It’s no coincidence that his first single is a Brazilian Funk bomb, he’s discovered and signed Josi Dias, a Brazilian singer who left the neighboring country and is now based in Argentina.

Together they’ve created two killer tracks. On the A side we’ve got ‘Um Brilho Novo’, a Brazilian MPB influenced Soul track, it might make you think of Trio Ternura or Tim Maia, but it will definitely take you to a Brazilian summer. And then on the B side we’ve got ‘Rua Nova Barão’, an uptempo Samba-Jazz with a big influence of Airto Moreira, Flora Purim and Carlos Garnett. Eddie Piller heard this one and said “If you close your eyes you can almost be in Dingwalls or The Wag Club in 1988”

Josi Dias & The Kevin Fingier Collective new single will be out 1st October and the release is limited. 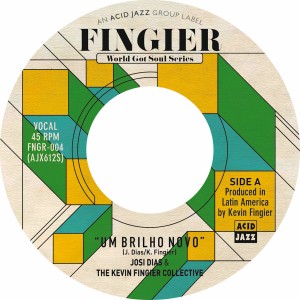