January's barely a week old but already the releases are flooding into the 45 Live office. We have always felt it's our job to bring to you the cream of the current crop that has been pressed on forty-five wax for your ears which brings us nicely to this 'first time on 45' release from Kid Frost on the Electrobeat label out of the States. The current generation will no doubt be familiar with his producer son Scoop DeVille but before DeVille was carving a name for himself his pop reigned supreme. During his recording career he released records on Virgin‎, ‎Ruthless‎, ‎Koch‎ and Low Profile. His most famous track was 'La Raza' but it's here on two fresh electro cuts where he truly shines. Unravel the lino, pack some fresh 'D' batteries in the portable and get loose!

Limited to just 300 copies, head over to Juno to secure your doubles today.
JUNO 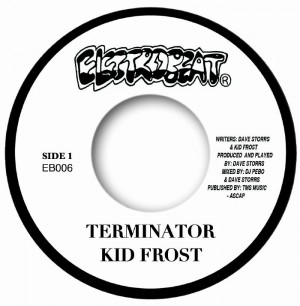